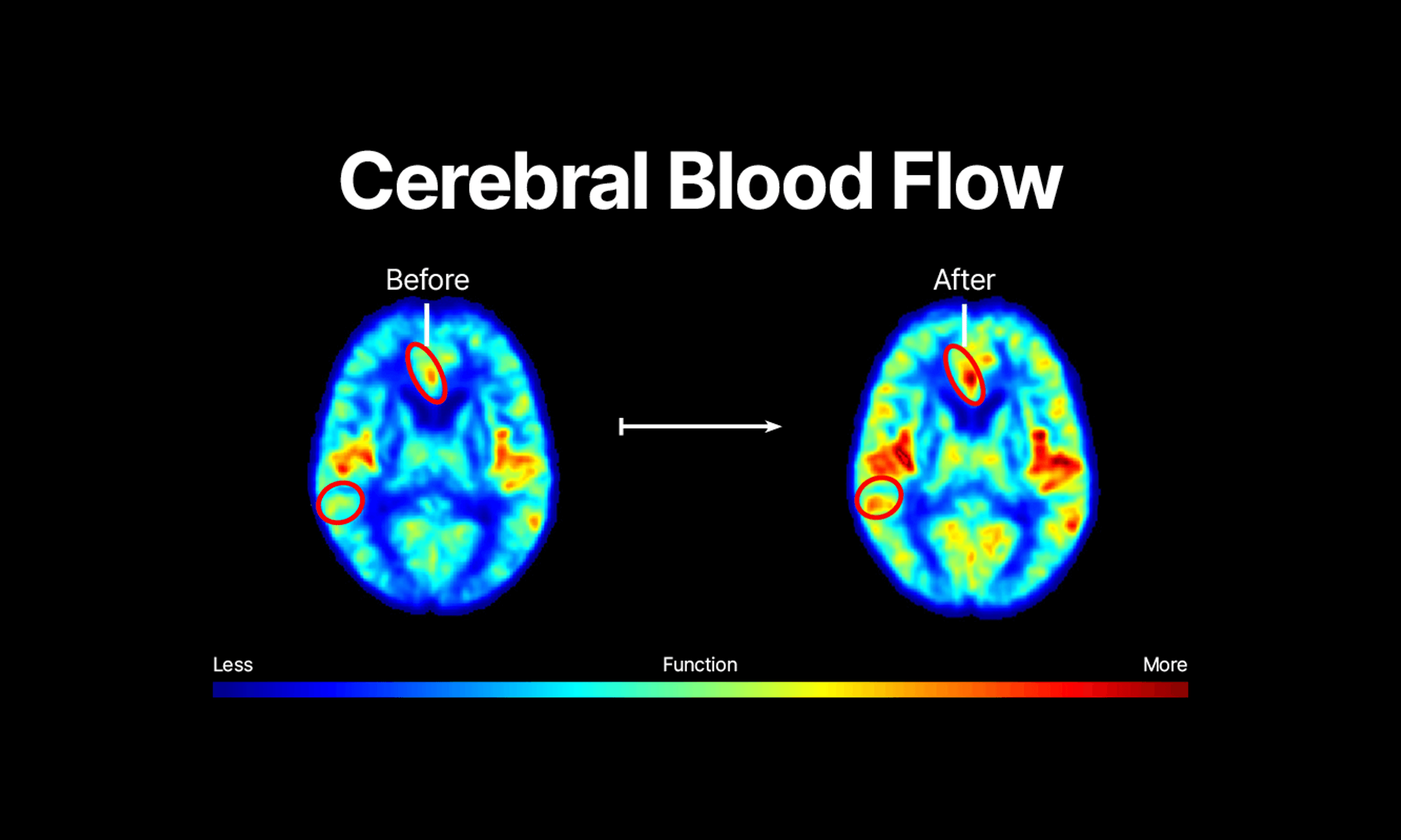 This landmark study, published in Aging on September 9th, is part of an ongoing program researching age-related cognitive decline. Conducted by the Sagol School of Neuroscience in Tel Aviv and Tel Aviv University, the study marks the first time that hyperbaric oxygen therapy (HBOT)—a non-pharmaceutical method—has proven effective in reversing the main activators and early symptoms of Alzheimer’s disease.

HBOT is a form of oxygen therapy that involves administering 100% pure oxygen to a patient in a pressurized environment. HBOT has been used for decades to treat other conditions, such as non-healing ischemic wounds, but for the first time, it also has shown promise as a potential treatment for reverse the main activators and early symptoms of Alzheimer’s disease and dementia and treat brain and cognitive problems.

A treatment based on this unique protocol is now available at Aviv Clinics Dubai.

The brain is an incredibly complex organism home to a vast network of nerve cells (neurons) that depend on oxygen to thrive. As we age, the number of blood vessels in our brain naturally begins to decline. This causes reduced blood flow to the brain, which in turn causes the brain to receive less oxygen. This decreased blood flow is also known as vascular dysfunction, and it’s a known precursor to Alzheimer’s disease, along with amyloid plaques.

What is an amyloid plaque?

Amyloid plaques are hard, insoluble clusters of proteins formed in the spaces between neurons. They’re formed from beta amyloids—microscopic protein fragments produced by certain cells in the body. In the brain, beta amyloids are found in the fluid between neurons, and a healthy brain usually flushes them out without consequence. However, just like plaque can accumulate on your teeth if you don’t clean them regularly, the same thing can happen in your brain.

As the brain ages, it’s more susceptible to forming amyloid plaques in its blood vessel walls. Once an amyloid plaque forms it can damage the neurons in the brain, ultimately resulting in neuronal death. These plaques are thought to contribute to the progression of Alzheimer’s disease and the cognitive decline associated with it.

For years, scientists have wondered whether or not it’s even possible to dissolve or shrink amyloid plaques. The groundbreaking new study proves for the first time that a unique protocol of HBOT can both reverse amyloid plaques and prevent them from forming in the first place.

How HBOT can reverse amyloid plaques

Study researchers initially used HBOT with mice to understand the effect it has on amyloid plaques. In this first part of the study, researchers delivered HBOT to a group of mice whose brains contained amyloid plaques. The mice received two 60 minute HBOT sessions a day, five days a week for four weeks. The researchers discovered that HBOT significantly reduced the amyloid burden in the mice’s brains, decreasing amyloid plaques by over 30% and shrinking plaques by nearly 19%. 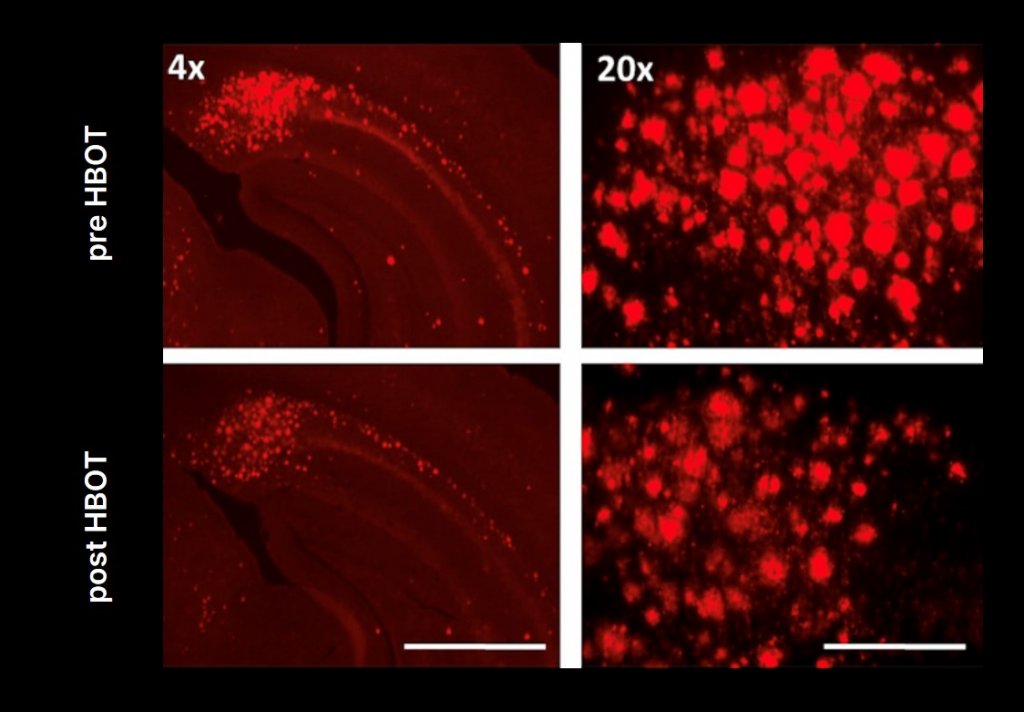 HBOT was also shown to prevent the formation of new amyloid plaques, and the mice exhibited improved performance on cognitive tasks when compared to the control group, giving us evidence that HBOT improved their cognitive functions.

The mice-based study gave promising new evidence that HBOT can be used as both a treatment and a preventative measure for Alzheimer’s disease. Researchers then sought to use the same protocol with human subjects.

The human test group consisted of six patients around age 70, all suffering from mild cognitive impairment. After receiving 60 daily HBOT sessions over a three-month period, the patients saw significant improvements to their cognitive functions, including better memory recall, concentration, and response times.

What this means going forward

The study gives us hope that HBOT can be used as a viable drug-free and non-invasive method to prevent and treat Alzheimer’s disease, bringing us one step closer to preventing and even repairing memory loss and mild cognitive impairment.

“By treating vascular dysfunction, we’re mapping out the path toward Alzheimer’s prevention. More research is underway to further demonstrate how HBOT can improve cognitive function and become an influential tool in the imperative fight against the disease,” affirms Dr. Shai Efrati, one of the investigators conducting the study.

Dr. Efrati is also a medical advisor to Aviv Clinics in The Villages, Florida, which is the only location in the United States to offer the specific HBOT protocol used in this remarkable study. The Aviv Medical Program uses comprehensive testing and assessments before, during, and after the treatment protocol to track progress and provide multidisciplinary clinical team support.

For more information about the Aviv Medical Program, HBOT treatment, and how it may help your brain health, please contact us.

To read the study published in Journal Aging – click here.